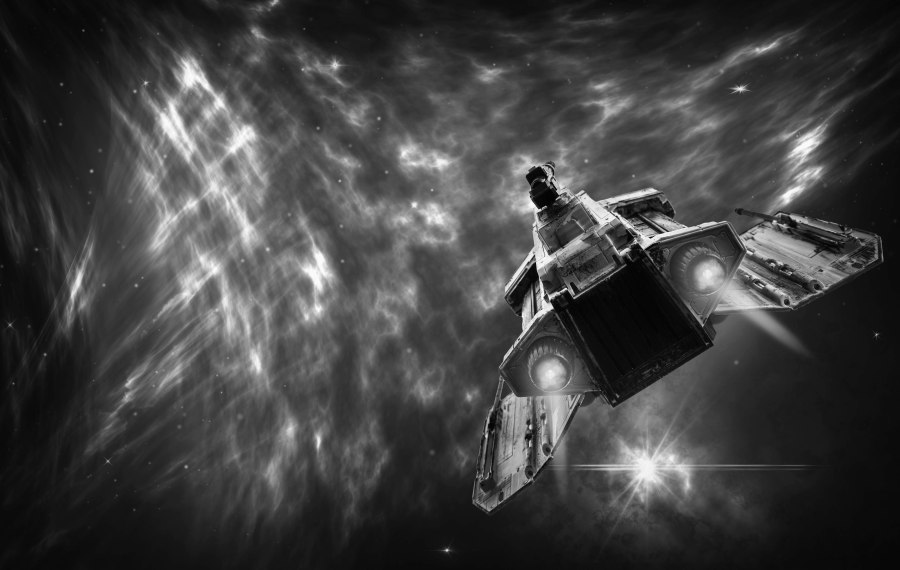 This is a very short bit from a science fiction story on which I am working.  Please read, enjoy, and let me know what you think.

The faint orange glow from Y-72’s main sequence type K star barely warmed the farthest reaches of its system some 4 billion kilometers distant. At this distance Y-72 is a small dot in the distance, recognizable from the rest of the background stars this close to the galactic core only by its relative brightness in comparison. Not only is the warmth and the light and any safety for living things from the warm orange ball extremely diminished this far out, so is the stars gravimetric force.

Looking out from the direction of the star, out away from what little warmth and light there is, the faint band of the galaxy arches across the endless black. Deep in the endless black, out beyond the safety of Y-72’s stellar winds lies the possibility of more. The possibility of other stars, other planets, other. That plane of bright points lies both farther away than most can even imagine and tantalizingly close. As you stare out from the systems core towards that potential a single point begins to wobble. The light from the distant star seems at first to flatten then spin. Soon the points of light nearby swirl and spin around a central point and the blackness between the stars seems to get darker and coalesce.

The single point of darkness quickly grows and the very shape of space seems to bend and warp. The spot becomes a dot. The dot becomes a ball then pushes out against itself bulging around the edges where the light shimmers and flattening in the center where the light can’t reach. This torus of light and dark shimmers and glows as gravitational lensing distorts the reality behind and around it.

Suddenly from out of this nothingness a craft suddenly appears. This new resident of Y-72 emerges from the nothingness at the heart of the torus. Nearly one hundred meters long and ten in diameter this gun metal grey cylinder glints in the light of its new home. The simple, yet amazing brain of this machine recognizes its new existence hundreds of light years from where it just was. It quickly runs a self diagnostic, checking the length and width of its functions and shape. In milliseconds it has run this check half a dozen times to be certain it is ready to begin its job, then from the edge of the cylinder, near where it joins with one of its hemispherical end caps, a portion opens and a tight beam laser pulse sends a message back along the tunnel through time and space it has just traveled.

As the last bit of the laser’s energy completes sending its message into the gate the torus ceases to be and the fabric of reality closes behind the lonely craft leaving it by itself in its new home.

The Art of Blogging