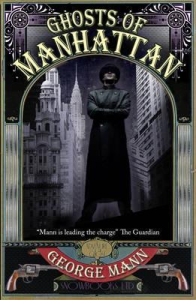 It was a time of great uncertainty and upheaval in America. A time of grand, expansive plans as a small part of the population enjoyed untold prosperity. It was also when the ability to survive yet another day was a small plodding measure of success. As a small number of people tried desperately to fill the existential hole in their existence through vice and depredation, the larger portion attempted to fill that hole to stave off the sinking feeling of loss and un-connectedness.

Actually, it wasn’t very different from what we’re going through in America right now.

The city itself dealt with its own sense of dichotomy. Shining towers of glass and chrome clawed at the heights of heaven, while sprawling tenements barely managed to protect their inhabitants from both the depredations of nature and of man. Dirigibles floated like protective whales above the city. Steam powered automobiles ziped through the arteries of the great metropolis, delivering people like disposable nutrients to power the city’s growth. These same people also retard the growth of the city and their fellow people, like a cancer grown out of control from the very corruption, crime, and vice that lubricated that growth.

This picture is looking more and more familiar.

One man pierced the veil of darkness attempting to bring a modicum of hope and light to the beleaguered inhabitants of his city. A flawed man. Damaged by his past, a horror unspoken but seen brought on by the inequity of his fellow man. This man prowled the city by night. Shrouded in darkness he remade himself to instill fear into the criminal heart. He placed himself outside the law. Being a villain so he can be the hero. Not the hero the city deserved but the hero the city needed. He is vengeance. He is the night. He knows where to find you and what you fear. He is… the Ghost of Manhattan.

Wait. Hold on for just a minute. Is it just me, or does that not sound amazingly familiar to anyone that has read a comic book in the last seventy-five years or seen a movie this millennium?

This is the primary flaw with George Mann’s Ghosts of Manhattan. It is just too derivative of Batman. The millionaire playboy turned masked vigilante, teaming up with a rundown police detective in order to bring down a crime boss that has his own theatrical flair. Along the way, we discover the damsel in distress that will eventually save the day with her own demise, thereby throwing our protagonist into an even deeper despair.

The book also suffers from one other primary flaw. It embodies the very dichotomy the book is attempting to display. A dichotomy in the universe George Mann tries to create. We have the trappings of the standard 1920’s noir thriller. A heroine that is ultimately doomed to death. A hero ensconced in his own tableau so deeply he can never escape or move beyond the life into which he feels he has been thrust.

Juxtaposed against this familiar backdrop, Mann has thrust steam powered cars with the capabilities of the normally petrol powered verity. Antennas stud the buildings, but not for the use of radios or even the early adoption of television, for which we have some sort of communal concept for that image. Rather these antennas are for some form of steam powered holographic communication device utilizing a strange blue hue as a visual medium. Finally, in addition to the antennas, select roofs also park aircraft. Aircraft considered rudimentary even by the standards of the mid 1920’s, yet they manage to launch from the top of relatively small and low buildings with the assistance of rockets. Likely very similar in design to the devices attached to the Ghost’s boots which allow him to fly from one rooftop to the next.

That’s right. There is a bit of Iron Man in the millionaire playboy as well.

Glazing this already unusual doughnut, the author decides to throw in a helping of the macabre and Lovecraftian. Unspeakable horrors lurking just within the shadows permeating this world. Unspeakable horrors, which helped to drive our protagonist to become the Ghost as he fought in his world’s version of World War 1, and still threaten the delicate balance of the coming new and bright future for which man strives.

Oh, also there are Golems. Actual gigantic and neigh unstoppable mud men, doing the bidding of the evil manic threatening the city and the love of the intrepid Ghost.

This dichotomy affects not just the trappings of the book but the structure and tone as well. While reading the first chapter I thought George Mann had actually constructed a novel for young adults. Something for the tween to young teen audience. I have nothing against this type of book and remember fondly reading them myself when I was that young, so many years ago. I would not even place myself above reading and even enjoying one now. If it was well written. The Harry Potter early works are a perfect example. However, within moments of reaching this conclusion, the novel takes a dramatic turn into a definitely more mature audience with language and sexual scenes. And, again, I have no issue with swearing or sex scenes in my reading material. However, the jarring and sudden switch was a bit off putting.

Lastly, the foreshadowing in this book just doesn’t work for me. Often authors know they are creating a multi-volume work and purposely place Easter eggs to tie into the future novels and add a sense of continuation for the reader. I have read the first two novels in George Mann’s Newbury and Hobbes series, The Affinity Bridge, and The Osiris Ritual and in those the placement of information which is alluded to but not resolved (or even considered until the next novel) does happen. In those novels, the foreshadowing seems to work more effectively. Perhaps this is due to information utilized as foreshadowing rather than objects and action. Unfortunately, when dealing with a novel like Ghosts of Manhattan, which contains a good dose of mystery, especially of the noir quality, the foreshadowing elements just become annoying distractions.

I must say I did enjoy the first two books in George Mann’s Newbury and Hobbes series and the third volume is in my “To be read” pile. I hope The Immorality Engine is a more satisfying read then was the Ghosts of Manhattan.

One thought on “Don’t I Know You: a review of Ghosts of Manhattan”

Someone lost their elephant! #cambridge
And the views around the market. #cambridge #cambridgemarket #canbrdigebenchs
A sunny day in Cambridge yesterday.
I wondered where I put that. #ourplaceinspace
New #dinkydoor here in #cambridge. You should try and find it!
Had a free Tuesday! Copy the link below to check out the new video! https://youtu.be/kYL93sNcMrI
I had a free Tuesday! Copy and paste the link to check out the latest video! Don't forget to Like, Share, and Comment! https://youtu.be/kYL93sNcMrI